So, I am now 4 days in to my travels, and dying to say a few things about it. 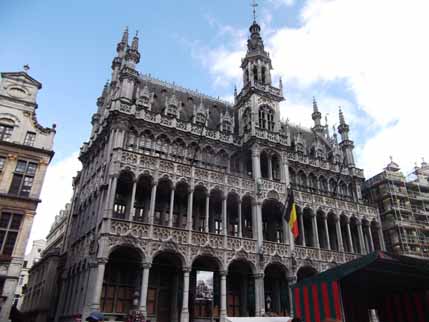 Some of the amazing architecture of Brussels

My first day involved getting the Eurostar to Brussels. As already mentioned, it turns out a one way Eurostar ticket cost as little as £35, and is about the easiest way to get off of Great Britain. Being able to take the tube from my house in London to St Pancras station in town, breezing through some minor security, and then 2 hours later you’re in Brussels with no security at all on the way out. So I was very impressed by that, and it gave me time to explore a little once I was there. Brussels it turns out has its own street bike hire, like those in London but with less advertising, so that provided an excellent way of seeing a lot of the city in a few ours.

After spending the afternoon wandering, I then met my first Couch Surfing host. Couch Surfing is a website, and on it people advertise their spare sleeping space, for travellers coming through the town to use for free. It provides not only cheap alternative accomodation, but a chance to instantly meet a local, and for them to meet someone from somewhere else too. My host Jean Francois made me traditional mussels with chips for dinner, so you can’t ask for more than that :).

Then on Friday I really got into the gritty bit of the travel – my first day hitch-hiking. I have got people in towns at 600km intervals to agree to host me on their couches – the first destination was Erlangen, near Nuremberg in Germany. And it went extremely well – thanks to 4 different drivers spread throughout the day – Farad, Michelle, Susan & her 8 yr old daughter, and Frans! I got to Erlangen by 7 o’clock, in time for dinner from my lovely hosts Hanna and Quentin, and then another bike ride, as they toured me around their university town. An amazing, and amazingly successful, day! By using a few stops that I had specifically found recommended on the amazing website hitchwiki.org, or otherwise sticking to big service stations I could see on my A-Z, it was possible to get away from every stop within 30 minutes, and speed down the German Autobahns in no time!

On Saturday morning Quentin took me on his motorbike back to a motorway petrol station, and from there I got a lift with Ngo Minh Duc, a Vietnamese guy who only spoke Slovakian! After originally telling me he could only take me 100kms, he then changed his mind after he realised we could just about have a conversation, and took me 300 km to Linz in Austria. Unfortunately, I had to get out in a bit of a hurry as he was headed in the wrong direction after Linz, and the truck stop I got out was not quite such a great spot. After 4 hours there without any luck the sun was going down and I walked off the highway and set up my tent, to find a better spot the next day. 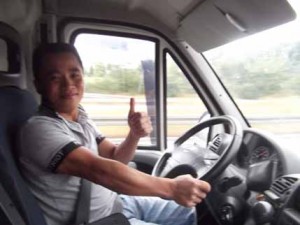 And then today, Sunday the 16th September, I started again and found my way to a much better motorway on ramp, and got another lift within 25 minutes from a business man Michael, almost as far as my destination Slovenska Bistrica in Slovenia. I was able to enjoy the beautiful Austrian scenery from his BMW. He stopped me at another service station just before the Slovenian border, and I believe that would have been an excellent place were it not for the fact it was Sunday afternoon – in the end it was another 3 hours of fretful waiting there before I got a lift the last 40 minutes to my new friends in Slovenia where I am writing this from :).

So. What is the lesson I have learnt so far? Hitch-hiking is a fickle business! There is no way to do it happily but accept the fact that you could be 5 minutes, you could be 5 hours. But a good spot at a good time is really the key to it – I am hoping that from tomorrow, the weekday traffic will be a little more predictable. And the other thing I have learnt is that for all the despondency of waiting somewhere for hours, it is matched by the enormous gratitude you feel to the random stranger who finally gives you a lift 300 kms, for nothing more than a chat, through an amazing place that you get to see face to face from your window at ground level.

More will follow, on the highs and lows of driving further into Eastern Europe and Turkey, and when I get to Egypt a bit more in depth info on what carbon is involved and saved at each step.