I’m now writing from Le Havre, on the Normandy coast of France, where in 11 hours I get on the cargo ship that will take me to Guatemala. This journey will take 18 days, during which there will not be internet access, so here is a quick run down of the trip that’s brought me here, and what I know about the next trip, across the ocean.

The last 2 weeks has been a bit of a whirlwind – hitch-hiking feels a bit more natural now, but it’s still amazed me each day how far I’ve been able to get on people’s kindness. And I’ve also had a bit more time in many of the places I’ve stayed, to wander around the cities and get to know my lovely Couch Surfing hosts.

Back in Turkey – More Amazing Hosts and Hitch-Hiking 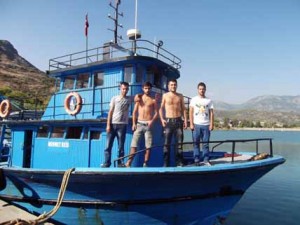 Efe, Mert, Okan and Selim gave me lunch on their boat in Anamur, on the way to Antalya!

Almost 3 weeks ago, on the 11th of October, I left Sabs and Chris’ in Cairo, and took another ferry back to Iskenderun, Turkey. There, I stayed with lovely hosts who picked me up and gave me dinner even though I didn’t get off the ferry until after midnight.

The I hitched to Mersin – more lovely hosts, and the next day hitched the long and windy 500kms to Antalya, travelling along the beautiful unspoilt Mediterranean coast. There I had 2 nights to relax and swim in the sea with more new friends, before the next day hitching on to Kutayha.

Hitch-hiking feels like a bit of a race against time – trying to get the last lift you need before it gets dark and a lot more difficult. Every day between Iskenderun, Mersin, Antalya and Kutayha I was certain, by half way through the day, that I wouldn’t make it to my destination that night. Then, as the sun got closer to the horizon someone else would surprise me with their kindness and remind me how far you can get on people’s kindness. Whether it was Sircan taking me slowly 260 kms from Anamur to Antalya in his truck that was so old the brakes were seizing up when he went down the many hills, or the entire staff of a bread factory that picked me up after dark and raced me the last bit of my way from Afyonkarahisar into Kutayha.

I had a great day hitching with Ferudun straight from Kutayha to Istanbul and talking about everything (including the fact that he was the first Kurdish person I met in Turkey). Then 2 days more in Istanbul to hang out with a book critic and taste a bit of her celebrity world, and finally see inside the famous Blue Mosque.

Into Europe – Zagreb, Munich and Luxembourg

Then I spent 24 hours on a bus to get to Zagreb, where I hung out for a day before hitch-hiking the next day towards Munich. That day though I decided I would camp half-way, and spent the night in a freezing field in the mountains of Austria. Then the next day I got to Munich, seeing it just as the massive trees in its many stately parks were turning golden in the Autumn. Then the next day I got all the way to Luxembourg -another miraculous day requiring 5 different vehicles to get there.

In Luxembourg again I had a whole day to wonder around this peaceful city, with one of my hosts. Then the next day hitched the relatively short distance to Paris, where I stayed 4 nights with extremely hospitable friends of friends, Sylvain and Sabine – a great opportunity to see Paris and it’s surrounding suburb-towns from the eyes of natives and their friends. 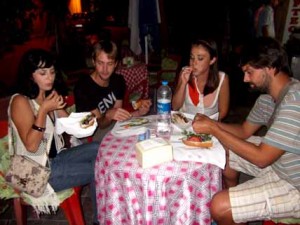 Dinner after swimming in the Antalya sea with Nisa, Aron, Dilek and Dale 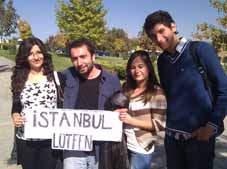 Josco – a friend of my Zagreb hosts, who showed me around

Frances and Johanna brought me from Stuttgart to Mannheim 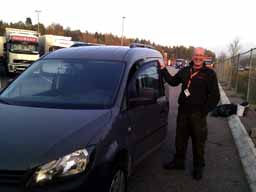 Martin – from Mannheim to Saarbruken

Paris and its Suburbs

In Paris with Sylvain and Sabine – lovely hosts!

These Paris satellite towns are infamous in France and internationally as the most dangerous places in France, appearing in the news for race riots and crime – my last lift, into Paris, even warned me to be careful where I was going. All I saw of Aulnay-sous-Bois however were very French markets and butchers – another good example, it seemed, of the dangers of places being hyped up in the media and people’s consciousness.

However, talking to my hosts, their friends and people who gave me lifts made it clear how significant issues of race around in France at the moment. Sylvain and Sabine are respectively of Indian and Polish decent, and told me how prevalent anti-immigration and anti-Muslim rhetoric is in the media and politics of France. The same driver who warned me to be careful in Paris’ suburbs told me he had grown up in another one, and no longer liked it because of the influx of immigrants over the years. It seemed to me that immigration is a major political scape-goat for problems in France – even more so than in England – including helping to tarnish people’s perceptions of the dangers in the Paris suburbs. With this in mind, it was a particular pleasure to stay in the area with my hosts, who could show me so clearly the reality.

The next step – the ‘BF Ipanema’

So yesterday I took a train up to Le Havre, ending my 7 week travels that have managed to take me through Europe to both Asia and Africa. Next up is the Atlantic – and this is certainly the scariest part of the journey for me. At 10 pm today I get on the cargo ship ‘BF Ipanema’ and tomorrow morning it leaves to head out into the ocean.

There are many websites allowing people to track commercial shipping, and the BF Ipanema can be seen in full here. It is 180 metre long cargo ship, owned by a German company but flying a Liberian flag, presumably for some tax or treaty reasons. When it gets updated, you can see exactly where the ship is and has been at this link.

What I know about the journey is fairly limited – it travels on a round trip between Central America and Germany, taking about 6 weeks to complete the circuit, although what it carries I will find out. I recently learnt the ship has room for 7 passengers like me (more than the 2 maximum that I had believed) – so it may not be too lonely on board. The crew speaks English as an international language (very convenient for me), and I get 3 meals per day. My host here in Le Havre works on the ships and tells me the crew are likely to be very friendly Filipinos, and that the cooks on-board are generally very very good. There is a ‘fitness room’ and aside from that, I will have a lot of time to read and stare at the ocean, and have filled my computer with e-books on everything from English Classics to Spanish to Medicine.

I am due to disembark the ship in Santo Tomas de Castilla, on the East coast of Guatemala, around about the 18th of November. Before then, as far as I can tell the boat only makes 2 stops – in Kingston, Jamaica, and Cartagena, Colombia. Hopefully I will be able to get some time off the boat there, and get some pictures for this blog!

See you in a few weeks!