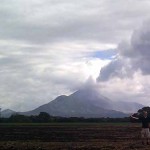 Volcan San Cristobal, Brando (one of the boys in the family) and me. The view from next to the Colonia

Hello from Nicaragua! I got here a month and a half ago on the 19th of November and have been rushed off my feet since then. But now I’ve finally found the time to update my blog and let people know what I’ve been doing. For ENCA, I have been visiting organisations we’ve links with and building new links with others. Meanwhile, with the bulk of my time I’m working at a health care clinic here in El Viejo, trying to help a little on projects to increase their patients and their sources of funding. And, while I am learning Spanish from the people I meet here, I’ve also started giving some classes on English and computer skills.

Nicaragua is a country full of social organisations, brimming with ideas for potential projects to develop. Working as a representative of ENCA is giving me great opportunities to meet people and see in detail some of the things happening here, and the obstacles facing development in the second poorest country in the Americas. 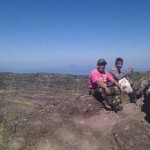 On the lip of Volcan Cosiguina, with my hosts from the local communities

Working for ENCA is also giving me opportunities to travel beyond El Viejo and see more of the country. Two weeks ago I travelled to the Cosiguina peninsular, to climb Volcan Cosiguina, an inactive volcano in a protected forest area at the edge of the country. I was taken there by the residents of Milagro de Dios, a community of independent farmers living at the base of the volcano. They are attempting to organise and plan ecotourism projects, to benefit from the tourists that pass through their community en route to the volcano, and to help protect their environment. Through this they hope to generate a cash income to allow them to develop their community further – the income they receive from farming is only just enough to live on, and currently the community lacks some of the most basic fundamentals such as a water or power supply, or sufficient barbed wire to protect their crops from grazing animals. 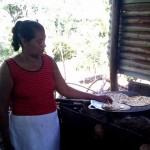 One of the intended beneficiaries of the CMO cooker project

Being here has allowed me to deliver ENCA’s most recent donation of US$2000 to the Consejo de Mujeres de Occidente (CMO – Western Women’s Council), in Chinandega. This money has gone to buy improved cookers for 8 women who cook food in their homes to augment their family incomes. These women currently have open fires for stoves, and the smoke from the firewood is a serious health problem. The modern stoves are closed meaning 40% more efficient use of firewood and less overall smoke and deforestation, but they also have a chimney to avoid inhalation of this smoke. Meeting the CMO regularly, I’ve also been able to visit the 8 women selected for the project, seeing first hand the conditions they work in including the thick ash deposits across their kitchen walls and ceilings from the years of smoke. 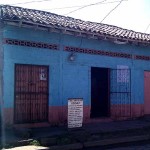 The Clinica Xochil itself

The thing that drew me to El Viejo in the first place is the Clinica Xochil, where I am spending most of my time during the day, with the aim of gaining some experience for a medical degree when I am back in England. The clinic provides cheap healthcare support for the poorest people of El Viejo. It was founded to support bananero workers and has since morphed into a specialist gynaecology clinic and centre supporting women’s rights. ENCA has supported the clinic for its work fighting legal battles against the irresponsible use of pesticides. I organised coming here directly with the director of the clinic, Edilbertha, and had very little idea what to expect before getting here. But I am now staying with her and her family, and very much a part of her hectic life, running around El Viejo advocating for different people and causes every day.

The work I’ve been doing with the clinic has mainly been helping organise the resources they have, and trying to bring in some more. Without solid funding, the clinic’s doctors are working for very little, and with much reduced and inconsistent hours. So I am helping organise projects to promote the clinic locally for more patients, and writing and sending proposals internationally to try and generate long term sources of revenue. 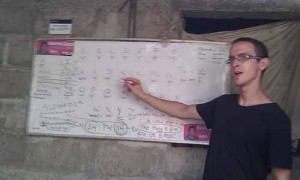 Me pretending to be an English teacher!

I’ve also agreed to giving English classes 3 nights a week to the youth and kids of the colonia where I’m staying with Edilbertha and her family. Though I am a terrible teacher, this is getting increasingly enjoyable, and there is even a little bit of an increase in the knowledge of my students.

What I am hoping will be much easier however, is teaching basic computer skills to groups of local union, healthcare and non-governmental organisation workers. This has been delayed looking for a place with adequate computers to do classes, but I am just about to start, having been offered the use of the CMO’s office. Like everywhere else, computer skills are becoming increasingly important both for finding work and running a successful organisation. For many people unable to afford a computer however, there is shortage of opportunities to develop these skills, so I’m hoping to be able to make an impact with workshops on the basics, such as Windows, Word and the internet. 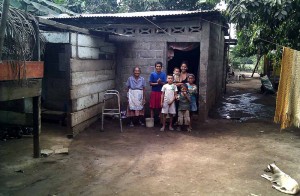 Edilbertha and some of her family, and the house where I am staying

Meanwhile, everyday I am learning more and more Spanish – another of the key reasons for spending time here. I am also soon to start shadowing the doctors working in another local clinic, through the connections Clinica Xochil. And among all these bits there is also the time hanging out with Edilbertha and her family, living their life among the Colonia San Geronimo on the outskirts of El Viejo. December is a particularly crazy month in Nicaragua – with fiestas, fireworks and celebrations most nights. Among other things, I spent boxing day in the sun on the beach, and had a day trip to Managua to visit the Christmas Funfair paid for entirely by the socialist and (very populist) Sandinistan government.

I hope that gives a bit of a flavour of what I’ve been doing here, I plan on getting a bunch more photos up on here very soon to give a bit more of a feel of the how things are going so far.