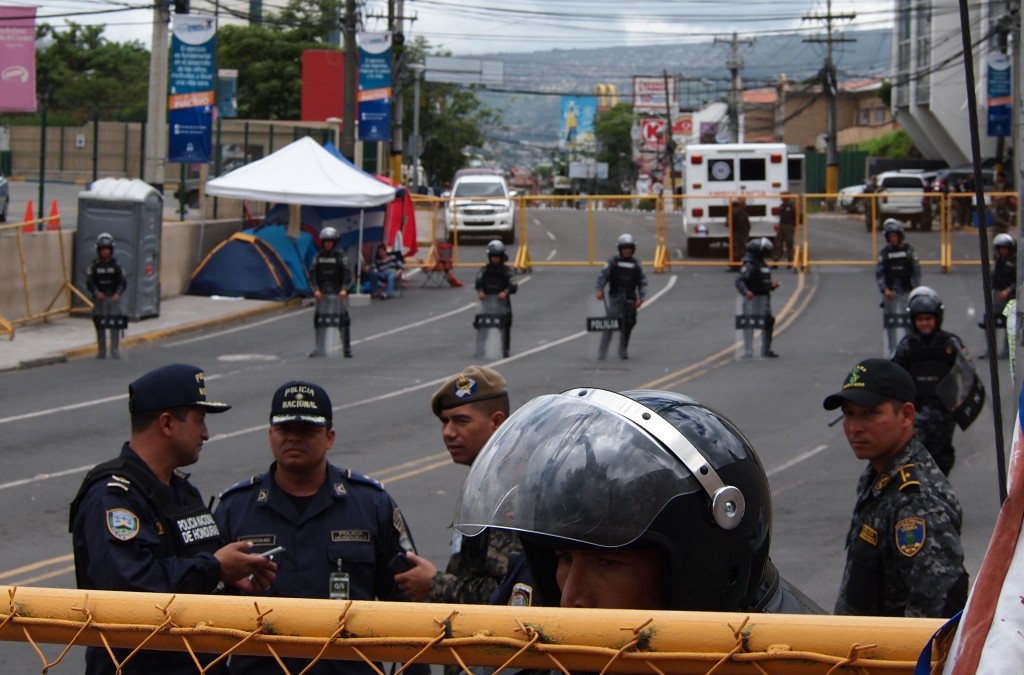 On the road adjacent to the Presidential Palace, the Police blockade the entrance to the peaceful hunger strike demanding the president’s resignation. The strikers are in the tent on the left

I have now been in Honduras for 1 week, mostly in rural Honduras learning about COPINH’s indigenous rights struggles. Today though I am in the capital, Tegucigalpa, as COPINH has sent a delegation to join a burgeoning “Antorchas” protest movement. This movement started to manifest itself in mass demonstrations only 2 weeks before my arrival, and it represents the broadest resistant front – and the strongest hope for an end to corruption – that the country has seen since the 2009 military coup.

The “Antorchas” movement – named after the torches they carry on their marches, and also known as Los Indignados, (“The Indignants”) – started late 2014 as a youth movement in Tegucigalpa. Frustrated with the lack of real change offered by battles between the political parties, they united as a non-partisan movement against the corruption in the country. In the last few weeks however, the movement has truly become ignited. Evidence has emerged that hundreds of millions of dollars robbed from the Honduran Social Security Institute have propped up the ruling National Party, and left thousands to die from lack of state health funds.

The theft of state money by the powerful families associated with the political parties – including money from tax-payers and international aid – had become so endemic as to be almost accepted. Whole ship-loads of food have gone missing, leaving rural Hondurans without vital aid. Every part of the state has been affected, however the recent revelations have made clear exactly the degree and human cost of the corruption. The IHSS – Honduran Institute of Social Security – has been systematically robbed by sham companies, that have overcharged for services that have never been delivered. Medicines have even been produced without active ingredients, in a hugely damaging fraud against the country’s public health. For many years, this has left the health system desperately underfunded and understaffed, with huge waiting lists and hospitals giving patients lists of the supplies they need patients to buy, in order to carry out their procedures.

In the last few weeks, Honduran journalists have discovered cheques from the IHSS and the false companies implicated in this fraud, that show that part of the stolen money went directly into the accounts of Honduran political parties. The 2013 elections brought to power the current president Juan Orlando Hernández, and cemented the power of his right-wing National Party which has ruled since the military coup in 2009. The elections were full of irregularities, with buses of voters being brought in to shore up the National Party, and gifts such as roofs and food being used to buy poor voters off. The cheques show that much of the money for this election fraud was stolen IHSS money. It has been calculated that almost 3,000 people have died – and thousands more left unsupported in their illnesses – as a result of these thefts.

These revelations have sparked the Antorchas protests into a mass popular movement, uniting the middle classes and previously apolitical masses with the aims of the left-wing resistance that came into being after the 2009 coup. The movement has several parts and several aims, but their main demands are the resignation of Juan Orlando, and for an international Commission against Corruption and Impunity (“CICIH” in Spanish), to root out the perpetrators. This idea is modelled on the UN commission that has recently seen the imprisonment in neighbouring Guatemala of the Vice President, and many other politicians, for similar crimes. In Honduras, the courts and government are so riddled with corruption that only an external international body can fulfil this task. 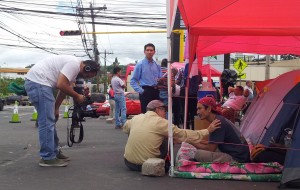 Outside the police cordon, more hunger strikers, now without food for several days, mingle with the media and other protesters

The movement has been growing, with the Guardian reporting on the thousands-strong protests in Tegucigalpa and other cities on the 29th May, shortly before I arrived. The Antorchas have been marching every Friday since then, but this week has seen a new push. Starting this Monday, the 22nd June, 6 young members of the movement have been staging a hunger strike in the road adjacent to the Presidential House, which has become a focus for the protest movement. The police have set up a cordon refusing entry to the main core of the strikers, isolating them from their support. State Human Rights observers and Amnesty International representatives are denouncing this as a breach of their human rights and an attempt to break their will. The strikers have vowed to die before they cease the strike, which they will only do once the CICIH is in place.

As an important part of the resistance, COPINH has maintained a presence in Tegucigalpa since the Antorchas movement began, and was invited to come to support the hunger strikers. I travelled with them last night, and today we spent the day at the site, talking with those hunger-strikers and other protesters who are not trapped behind the police line. The indigenous Lenca of COPINH performed a spiritual ritual to draw on ancestral support for the strikers, and I met the journalist who originally blew open the case of the IHSS cheques.

The anger of the masses is palpable here – increasingly their resignation with the state of Honduran services is being replaced by true indignation at the depth of the lies and crimes of the people who claim to represent them. For the long-term resistance, there is also huge excitement, that the winds of change may finally be coming to Honduras after 6 years of sham democracy and repression. But the end result is far from a foregone conclusion. The support for the hunger strikers has led Juan Orlando to announce today a national version of the CICIH. This is an utterly hollow gesture as the national courts are effectively owned by his party – in an overnight judicial coup in 2014 he illegally replaced 3 hostile supreme court magistrates with his own hand picked people.

However, an international CICIH has possible pitfalls. The Guatemala process has taken years to have an effect, and many consider it to have only been possible through the support of the United States. Juan Orlando has long been in bed with US corporate interests, and the US (as well as the European Union) have closed their eyes to the repression in the country, declaring it “open for business” in 2011. However, the popular movement may now force the US to look for other Honduran partners, and they may find them in the newly arisen Anti-Corruption Party, “PAC”. Although the Antorchas movement is non-partisan, for many of its supporters PAC represents the political side of the movement. But PAC does not promise the radical systemic change that the long-term, left-wing resistance of Honduras hopes for. Its leader, Salvador Nasralla – popular from his career as a TV sports commentator – is a decidedly right wing candidate, with support mainly from the middle classes. He is unlikely to champion the rights of the poorest campesinos and indigenous – including COPINH and the Lenca – except where it suits his political campaign.

Tegucigalpa is certainly full of energy, that some sort of change may be coming. Tomorrow (Friday the 26th June), the Antorchas/ Indignados movement are calling another of their marches for the afternoon, and are predicting it will be the biggest yet. Up to half a million people are anticipated, drawn in part by the bravery of the hunger strikers, and the affront of the authorities blockading them in. However, Orlando’s National Party has called a counter-protest, and in a spectacular show of desperation and irresponsibility has called it for the same time and place – a blatant call for violent conflict. The Antorchas movement and the resistance are unarmed and non-violent, and the Hunger strikers draw inspiration from Gandhi’s non-violent protests, but the ominous shadow of violence is present. Meanwhile, this evening at least 7 military units have declared that they won’t fight the Antorchas protesters tomorrow – that they won’t protect those who have been stealing from the country. This unexpected rebellion from the military shows just how strong the winds of change are blowing in Honduras this week.

Tomorrow COPINH is remaining in Tegucigalpa in solidarity with the protesters, and I will report more news on these exciting movements very soon. 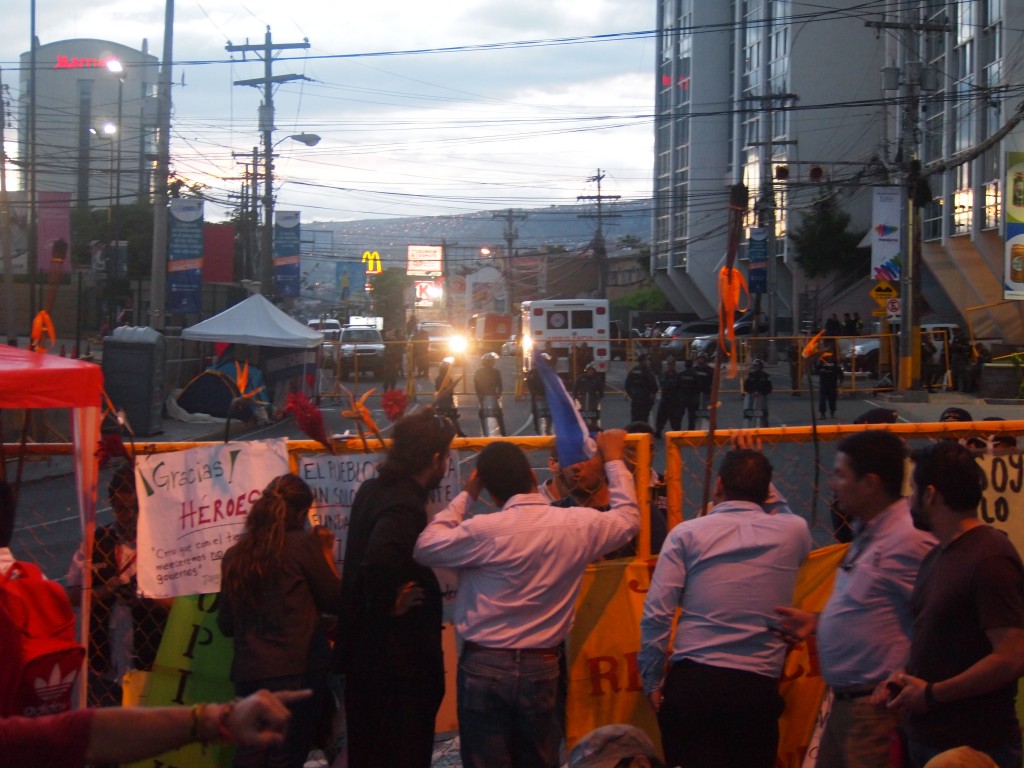