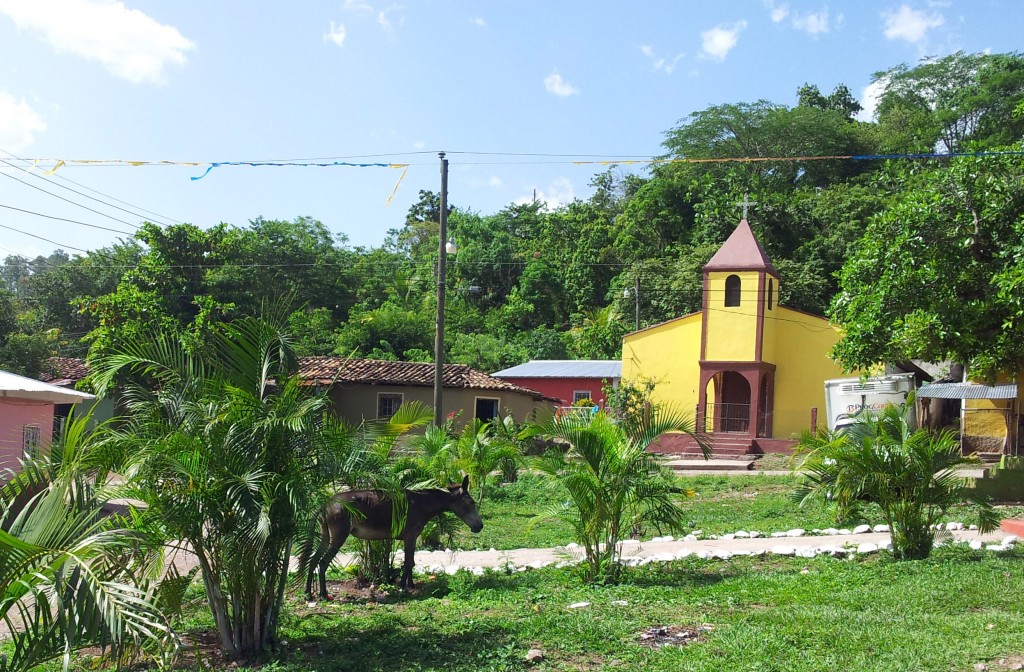 San Juan is a village in the hills about 3 hours by bus from La Esperanza. It isn’t as remote as San Marco – the community I last wrote about – but is in a beautifully natural setting. In the farmland behind the village, COPINH is supporting an indigenous farming cooperative who are in a deadly stand off with a well-armed, well-connected group trying to privatise and sell off their land. On Tuesday the 30th I was invited to San Juan with COPINH and saw a part of their struggle. 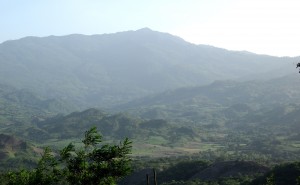 The rolling hills in which San Juan nestles

The farming collective consists of 27 families, and was set up in the 70s when the previous generation successfully applied for communal land title to an area of about 60 hectares. Communal titles mean that a group owns the land, rather than individual private holdings. Typically, a part of the title is then farmed communally, and the rest is divided between the individual families to produce their own crops, but these sections cannot be sold off without group agreement. This represents a traditional form of land ownership which ties the community together, facilitates resource sharing and makes a community more resilient. In contrast, private land titles tend to commodify the land, and put families in competition with each other. Communal land is also an important part of the indigenous economy and identity, and is protected under international treaties such as the International Labour Organisation’s “Convention 169 on Indigenous Rights”. It represents a form of empowerment for the very poorest sectors of society, giving them a solid basis for their livelihoods and preventing exploitation by landlords.

Communal land is also anathema to Honduras’ oligarchy of rich private land-owners and the big businesses they are involved in, which seek to profit from the control and sale of land. The San Juan cooperative’s 60 hectares falls in the middle of hundreds more hectares of land now owned by Mario Pérez. Pérez is an extremely powerful politician, Honduras’ Secretary of Congress, and very close to corrupt president Juan Orlando Hernández. His land is left largely unfarmed – despite the crushing need of Honduran campesinos – for breeding his collection of thoroughbred horses. Seemingly, the cooperative is getting in the way of the horse’s romping space, for Pérez is determined to get ownership of it. 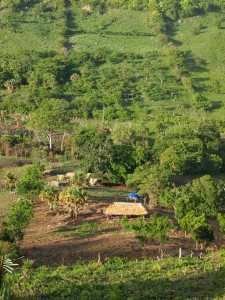 View of part of the coop land from above, including the corn field starting to sprout and the cabin which we slept under

The Rios family are also poor campesinos from San Juan, and are included in the coop’s original land title. However, they have separated violently from the rest of the community, and for years now have been exploiting the name of the coop for themselves and trying to usurp the other families. They have become Mario Pérez’s middle-men, living in a now murderously divided community, doing his dirty work and receiving Pérez’s substantial pay-offs for advancing the privatisation of the coop land. For many years the land hasn’t grown crops, and the Rios have used it for livestock while the other coop members rented farm-land. However, when it became clear that the Rios were using their fraudulent claim to the the land to try to sell it off, the other families became galvanised to take the land back and reclaim their rights.

Two months ago, and supported by COPINH, the men of the families moved en-masse back onto the overgrown land – but this was no easy task. The first I heard of the struggle was watching a video taken on this day by COPINH. The coop members are moving up a hill into the land towards a house, when shots are heard. The house is being guarded by the Rios family, and they have shotguns and pistols trained on the group – bullets can be heard hitting the ground near the camera. COPINH believes that Mario Pérez is involved in drug trafficking – the very thing that Orlando’s government receives so much US military aid to try and stamp out. They believe that the Rios‘ armoury – which includes an Uzi submachine gun – comes from these connections. The San Juan cooperative have nothing but machetes, and since taking the land in this show of group strength, they have been constantly afraid for their lives. 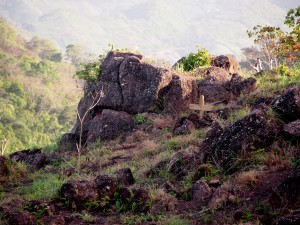 This fear was proven justified on the 20th May this year. At 2 pm two groups of men attacked the cooperative, firing on them and forcing them to run. Waiting for them over a hill was a third group. As coop member Moisés Durón Sánchez sheltered from their gunfire behind a rock, Saul Rios – according to at least 4 witnesses from the coop – moved forward under cover of tall weeds and shot him dead. During the shooting, the police said they were too far away to send help, they only got there after Moisés‘ death.

Despite the threats and violence against them, the cooperative members have stayed put. Their families stay in the village because of the danger, but all the older men of the families spend the time on the land – maintaining a large presence is their only way to defend it from further attacks. In just two months they have cleared the 60 hectares of weeds, and when I visited on Tuesday the corn crop that they have planted was just starting to grow. They also have yucca plantations, mango and papaya trees, and they are waiting for the harvest season. The commitment is a serious one – staying on the land to keep it secure means they’re missing out on paid work. If the Rios and Mario Pérez succeed in taking the land, they will lose everything.

The cooperative has their original papers from the 70s demonstrating their title to the land. However, the Rios’ have claimed the land for themselves, and with the power behind them the INA – Honduras’ National Agrarian Institute – have sided with the Rios. They have suggested that the dispute will be settled by granting the Rios family half of the 60 hectares, and the remaining 26 families the other half. The coop have refused to accept this blatant injustice, but INA is sitting on its hands. 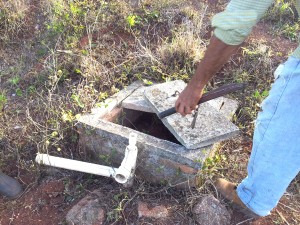 I visited the site with COPINH volunteer Luis – who is from Spain. The coop showed me the work they have done clearing it and planting it, and making palm-roofed accommodations for themselves. They showed me in detail the site of Moisés’ murder, and how they were ambushed. They also showed me the coop’s water system, installed in 2008, which brings drinkable water from several kilometers away to irrigate the site. Since Moisés’ death the Rios have, in broad daylight, stolen the valves that operate the system, and more recently started cutting open the pipes that supply it. The system is now dry, and the coop has to walk most of their water in from the village.

We stayed the night on the coop’s land, and then on Wednesday went with two of the coop members – Abener Jimenez and William Pinera, to the regional capital Santa Barbara. They were there to log an official charge against the Rios for the destruction of the water supply – a vital communal resource – and to chase up previous charges such as that of Moisés’ murder. Luis and I were there to tackle the disinterest and denial that is endemic in the ineffective criminal justice system in Honduras – especially when the people bringing the charges are indigenous, and especially when the defendants are supported by people like Mario Pérez. Shamefully, having European or US-looking observers by their side gives their demands weight that they’re not offered on their own – it motivates the authorities with the fear that the developed world is watching. 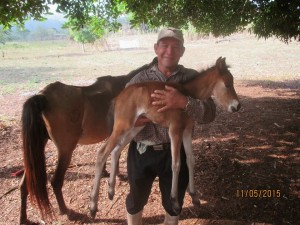 Moisés Durón Sánchez, photographed less than two weeks before he was killed at the coop

It remains to be seen the outcome of the visit. The coop members talked to the police, whose first response was a dismissive “oh, another charge?” – as if the threats, sabotage and murder the cooperative faces are a mere annoyance. But the police agreed to send men the next day to take photos and open a case. Then we visited the public prosecutor, to keep the pressure on the murder case that is still being processed, and arranged a further meeting with them for this coming Monday. The battle is ongoing, but with continued attention, we hope that the channels they have opened will ultimately cause enough problems for the Rios that they stop their intimidation. I will report more on this as news comes in. 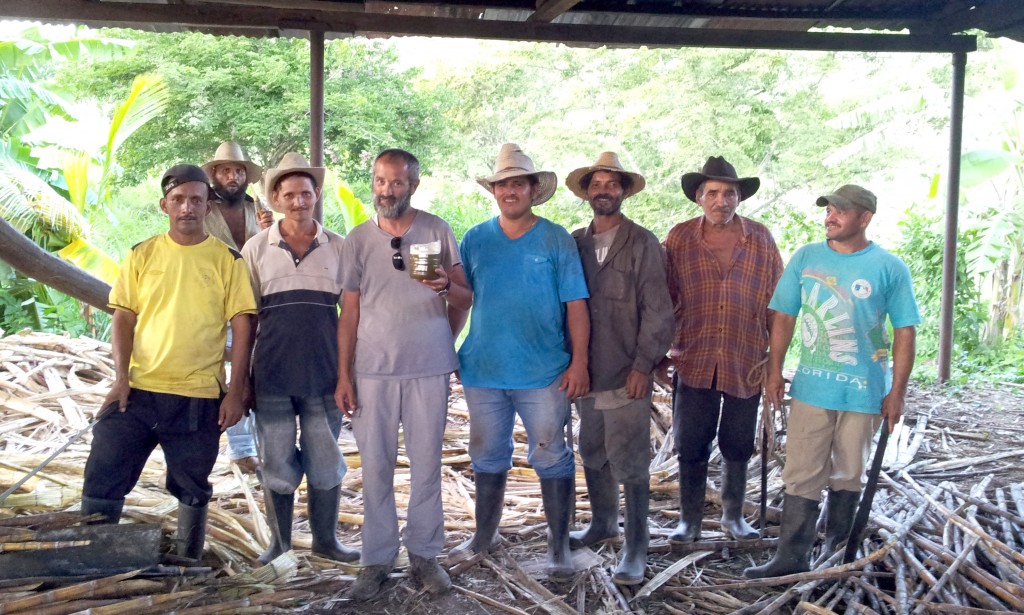