The Giza Pyramids, Cairo at sunset

I am now on my way back from Egypt after spending 2 weeks there. While in Egypt I got to relax a little with friends in Cairo (thanks Sabs and Chris!), got on a train to Luxor much further South and saw a bunch of pharaonic Egypt, and get a tiny first taste of the Arab world.

Going to Egypt at the current time, with the revolution still hanging in the air and recent renewals of protests following ridiculous videos, was one of the things making me nervous about the trip. But I was lucky that the people I was visiting already had months of experience in Egypt to help make me feel more comfortable. Also, by coming into Egypt by boat, and doing a little more couch surfing in Luxor, I was able to get an early introduction to how friendly and safe the country could be. More than anything, it was a lesson in just how skewed a picture the media paints with its constant barrage of one sided coverage of yelling, flag burning protesters.

Which is not to say that Cairo itself isn’t a crazy place! It’s certainly the most viscerally different place I’ve ever been – the streets are hot, dusty and narrow, crowded with ever repeating spice, juice, fruit, hanging meat and live poultry shops. People, cars, buses and tuk-tuks weave through each other in a way which seems sure to be fatal at every turn. Among all this the newly arrived tourist (i.e. me) wanders, trying to make sense of the traffic, the money, the scams, the food, the religion and avoiding being ‘haram‘, feeling very conspicuous and Western. 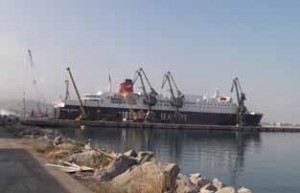 The ferry from Turkey to Egypt and back….

So I was thankful that I had had a more gradual introduction to Arabic people and the language. The very existence of the ferry I got from Turkey was a bit miraculous, and until I was firmly onboard in Iskenderun I didn’t fully believe it would happen. For a start, I had to change my plans at short notice when the original ferry I was to get from Mersin broke down! It had taken a lot of obscure webs searches to find the ferry details, and even people in Mersin and Iskenderun told me they hadn’t heard of these services. But it turns out they have been set up recently since the war Syria has made overland routes into the Middle East unsafe.

The ferry I was in had a Greek flag and had obviously been shipping passengers through the Aegean Sea fairly recently, but was now serving mainly truck drivers whose business relied on being able to get around Syria and Iraq. The drivers told me that it was much more expensive than the land route and was likely to exist only as long as Syria was 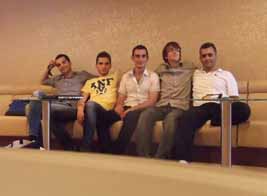 … and some of the Syrians on board

considered unsafe – thankfully though, once the war in Syria is over, older ferry routes that used to connect Italy, Syria and Egypt should reopen.

Very interestingly though, the ship was also carrying large numbers of Syrian refugees coming through Turkey to Egypt, and I spent much of the 36 hours getting to Egypt talking to these groups and families. They are luckier than many others who’ve been stuck on the Turkish border, but they had plenty of stories to tell of what they were escaping – fighting, air strikes and kidnapping affecting them and their friends. However, they were very friendly and generally very positive, with visas provided by the Egyptian government to support them during the crisis.

Their positivity and openness – what felt like a real desire to make friends, practise English and Arabic, and talk about their lives and mine seemed amazing to me. The Syrian coast was just visible from the ship at one point, and I was aware of being as close to a war zone as I have ever been, with what seems unimaginable horrors being enacted daily, fed to us by the news. But here were people who had just been there, whose homes were still there or in some cases rubble, but weren’t shell shocked zombies or yelling religious fanatics, but very real, normal people eager to engage with others. 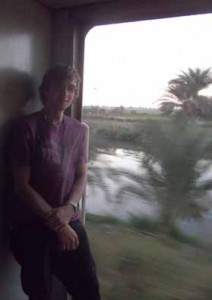 I can’t claim to have had any deep experience of the region and the people from my brief stay there, but it was certainly interesting getting a glimpse of a few different sides of the area. After being blown away by the friendliness of the Syrians I met, I had to wait with them for 5 hours for the Egyptian authorities to sort out the paperwork and let us into the country. Then, while trying to negotiate the turbulence of Cairo, I also met a few people working directly with refugees from Sub-Saharan Africa, and was told of how prevalent and acute racism is in Egypt, especially towards Sub-Saharan Africans.

I also travelled down to Luxor for a day, primarily to have as much of a touristy experience as possible while my friends were busy – Luxor is a big tourist destination, home of many extremely famous pharaonic temples and tombs. It took a full day of train travel each way to get there and back, and while there I couch surfed again, giving me a few more opportunities to interact directly with Egyptians. Once out of Cairo the insanity quickly dies down. On the train, I spent much of my time trying to find decent places to sit (foreigners aren’t technically allowed to go on the cheaper trains and so can’t reserve seats) and being captivated by the Nile as it flew by outside the open train door, with the desert in the background. But I was also able to talk to the young drafted soldiers (in Egypt there is 2 years mandatory military service for males), and people visiting their families outside Cairo.

In Luxor, some 650 kilometers South along the Nile, it is much easier and more rewarding talking to people on the street. My couch surfing hosts were a group of doctor and lawyer house mates with their own forward thinking ideas. One they called ‘the Sufi’ of the group, but in fact he described himself as an atheist, who related to Sufi Islam’s less dogmatic, more spiritual and personal version of Islam and morality. He told me that it wasn’t yet safe to be openly atheist in Egypt, but that there was an increasing number of young atheists, connected by the internet.

Another of the couch surfing hosts was a lawyer by training but said he was trying to get out of lawyering in Cairo as it was so often corrupted by a culture of money buying legal favours and protection. He filled in a picture many other people suggested to me, that under Mubarak Egypt’s police in particular were often corrupt, frequently seeking money and even framing people in order to get bribes back from them. 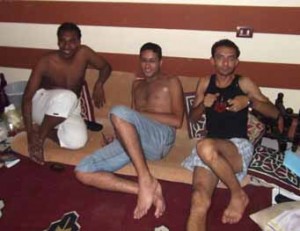 My couch surfing hosts in Luxor

Although it was perhaps a one-sided picture, many of those people more open to talking to Westerners told me that things were getting better in this respect under the new government, and were happy that Mubarak had been removed. But for many, the revolution had added to the problems of the global financial crisis in seriously reducing the amount of tourism money coming into them. Overall they were concerned that people in the West see Egypt as a safe and good destination for tourism, so their numbers would start to increase again.

So I had an amazing time in Egypt and with the Syrians I met. Aside from the amazing monuments I had a taste of the awesome difference of Cairo life, and a sliver of the more subtle ways in which life in Egypt is different. But what I didn’t see or feel was a mass of Islamist anger or even suspicion. I was able to see a little bit how Egypt and Syria, despite their differences, are full of normal people just like me, living and trying to live just like I do, and, thankfully, just as able to connect and relate to us as we are with each other.