Part 1 of my blog on my first journey through Turkey (here) focused on Istanbul, including the impact its rapid expansion is having on informal 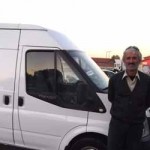 Hassan – Crazier than he looks

Istanbul was an amazing tourist experience, and a nice chance to relax after my journey through Europe. But the week after I left was a great experience in terms of hitch-hiking and couch surfing, meeting people and seeing how easily connections can be made with people under the right conditions.

On the morning of Saturday the 22nd my Istanbul couch surfing host took me by bike to a toll at the start of the highway out of the city. From there I got a lift first with 3 guys in a car to the next major petrol station, and then from there climbed into the front of a white van, driven by Hassan.

Already by this point I had an inkling of the generosity of many Turkish people, but Hassan was a great example. He told me he was heading to Duzce, the city I next had a couch surfing host at, and helped me phone the host there and work out exactly how and where to drop me off with them. Then, between errands around Istanbul and the surrounding towns, he stopped several times for tea – evidently his fuel to keep him going on his mad careening around Turkey – and without a second thought bought me several to keep me going too. 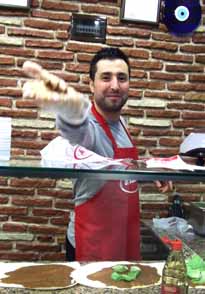 One of many unaccountably friendly people in Duzce. He was making Cig Kofte, which was amazing Turkish food

Hassan drove me into Duzce and left me directly with my next couch surfing host, Ismail. Ismail is a teacher in a school near the city, and he introduced me to several of his friends in the area. Like in Istanbul, I instantly had a group to help show me around and take me to the best places. Duzce had a small, and very friendly feel to it, and wherever we went people seemed to talk to each other like they were the closest friends. Ismail took me to several food places showing me the best local specialities, as well as a bar where some of his friends read my fortune in a cup of coffee, in traditional Turkish style.

In 1999 Duzce was at the epicentre of a magnitude 7.2 earthquake, that killed at least 890 people, an aftershock it seems of one in Izmit 100 kms to the East that killed almost 20,000 people a few months earlier. Very few buildings survived, and as a result, the centre of Duzce is almost entirely made of new buildings. Ismail took me to his friend’s apartment in one of the few buildings still standing from before 1999, and showed me the cracks in the structure that could be seen as you went between floors in the lift. His friend, like most of the other people in the block, is attempting to find a new place to stay, in the fear that another earthquake may come and finish the job!

Ismail and his friends were the epitome of generosity, and relaxed friendliness, and while I was with them they even got a phone call from my earlier driver Hassan checking I was OK. The next day they drove me first to one of their schools – closed as it was the weekend – to show me around, and then took me to a petrol stations and even hung around asking drivers if any could take me on to Ankara. It wasn’t at all long before I had a lift.

Ankara is the nation’s capital, and is a huge sprawling city in the heart of Turkey, surrounding by arid land. I stayed for one night with another host, Ertugrul, but thankfully he was happy to have a chilled out night watching TV, as I was exhausted when I got to his. Ankara, it has to be said, is a bit of a stopping off point for other more inspiring places in Turkey, and that is just what I did!

The next day my first lift out of Ankara – again after no more than 10 minutes – was a really interesting guy named Fatih. Another engineer, he was also the only person who brought up the issues of problems with the Kurds and Armenian ethnic groups in Turkey, and was also a stronger Muslim than the other people I had met so far. He took me deep into the heart of Turkey, stopping at the great Salt Lake ‘Tuz Gölü’ for me to take photos, and also buying, again unbidden, soup for us both for lunch. Then he dropped me outside Aksaray before going into the service station for mid-day prayers.

Aksaray was the only place I found a challenge hitch-hiking in Turkey. Surrounded by a beautiful vista with dry farm land all around and mountains rising in the distance, it was the most stunning landscape I had been in so far, but I had plenty of time to soak it up as I was there for 3 hours before I could get a lift.

I had been hoping to get all the way to Iskenderun that night (the departure point for my ferry – originally I had been headed for Mersin but the ferry there had broken down and the company had referred me on to another based further East). Aksaray however was only half of the journey, and by the time Bayram picked me up it was clear it was unlikely I would make it that night. 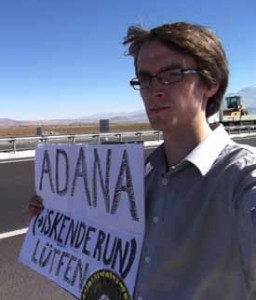 Trying to get a lift out of Aksaray – Beautiful surroundings, but very middle of nowhere

Bayram took me to a service station outside Ceyhan near Adana, and then I was so close to my destination. But night had fallen, which seemed to sound the death knell for any further hitch-hiking. Despite this, I was extremely well received at the service station – first, Bayran wrote me out in Turkish how to explain who I was and where I was trying to get to, but after I showed it to the service station staff they all seemed to get engaged in trying to find me a lift. In the single most touching of all the displays of random kindness I received, even they offered me tea free of charge, just for being there, and I seemed to make a flotilla of non-English speaking friends that night.

The station staff then allowed me to set up my tent right in the middle of the car park – an interesting place to spend the night, and the next morning the very first person I asked, Nuri in another white van, agreed to take me the last leg to Iskenderun.

At last, on the morning of Tuesday 25th September, I was in Iskenderun. I then had a whole day wandering town before my next host got home from work. As I was moving further South into Turkey it was feeling increasingly tropical, and it was evident that I was moving further and further from the tourist trail. In Iskenderun I stuck out like a sore thumb, with my massive backpack on my shoulders as I tried to see the sights! But again, I couldn’t have been in a better place for this – the number of interested (sometimes just amused, I admit) people who wanted to talk to me was phenomenal, and really everyone seemed to be genuinely friendly and concerned that I was OK, rather than the suspicious looks I might have expected elsewhere. By the end of the day I had a stack of names and photos to share on Facebook. 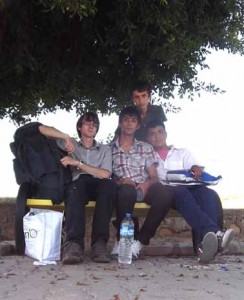 Some of the curious uni students in Iskenderun

Finally, I met Mehmet, my last host for this leg. He was also a teacher, and also a very interesting and friendly person, and I had the pleasure of meeting his family, who were visiting from their village in the mountains outside the town – yet more photos for Facebook!

Mehmet went out of his way to make sure I knew what I was doing the next day, showing me where to get the bus that would take me to Iskenderun port for the boat that would take me onwards to Egypt. But that will wait until the next entry on this blog. In the meantime though, the real point is that, while I was enjoying my time getting through Europe to Sofia, in Turkey I really started to enjoy the hitch-hiking. Hitch-hiking and couch surfing are perfectly matched with this country, whose people are so friendly and constantly seem waiting to help and make friends with strangers if they can. It really felt amazing there, and the good natured, relaxed nature of the people made it easy to be there as a hitch-hiker, too.

I think I was lucky not to give up at Turkey and take buses through the country. Had I had taken buses, there is no way I would have experienced quite how accomodatoing people are there. After all, hitch-hiking and couch surfing both involve entirely placing faith in other people to help you get to your destination. And of course, I am so glad I decided not to get to Egypt with a simple hop over all this space, and all those people, on a plane. The extra time it took was, in short, well worth the rewards :)

The view from Iskenderun water-front 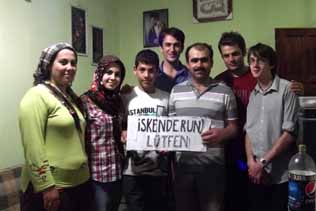