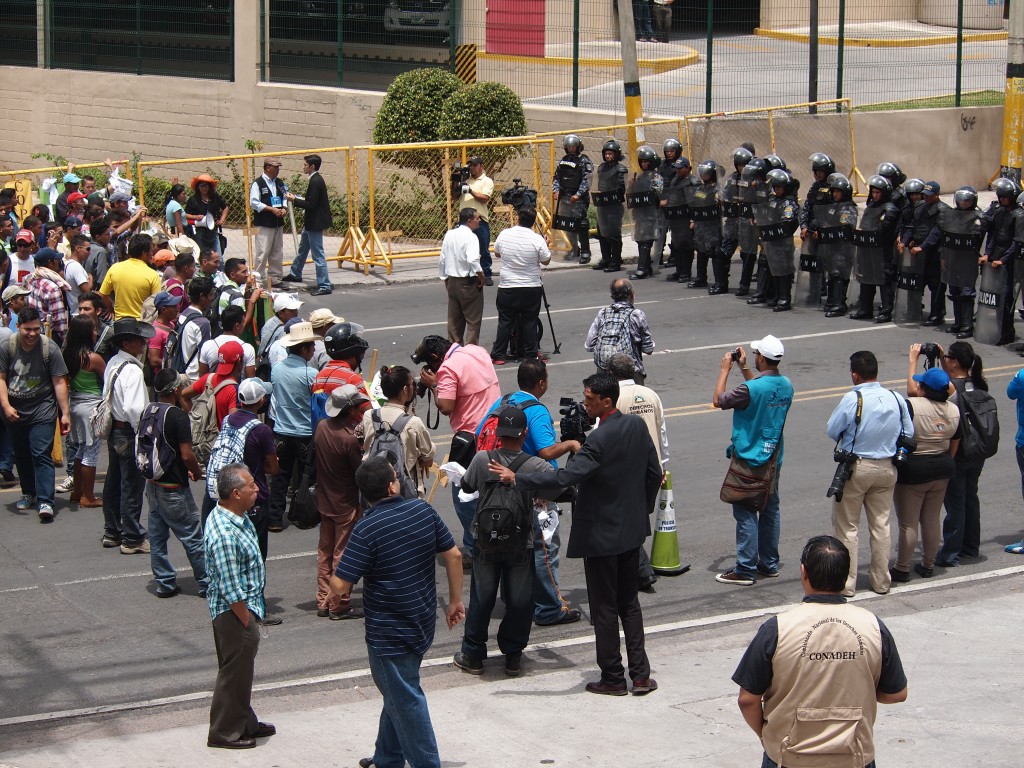 Visit our Act Now page: Support the Indignados’ demands for an end to corruption in their country – sign the UK online petition, or send an easy email to your representatives in Canada or the US.

Today I am back in Honduras’ capital, Tegucigalpa, getting stuck back into the “Indignados” mass movement which has appeared in the last 2 months. The Indignados, and their torch-bearing “Antorchas” marches, are demanding an end to corruption and impunity in their country.

The movement has exploded since revelations that the ruling National Party used money stolen from the Honduran National Security Institute for the election campaign of current president Juan Orlando Hernández. This theft has been linked to the deaths of at least 3,000 people from a lack of health care. There have been marches every Friday in Tegucigalpa, each one bigger than the last – in a previous article I reported from the huge march on the 29th of June. Then last Friday on the 3rd the march was even bigger, with some 60,000 people according to this Guardian article. The movement has been animated further by an ongoing hunger strike outside the Presidential House, which has become a focus for the protests and now has some 13 participants, who have arrived at different times. German Ayala has been there the longest at 12 days, but he told me he’s still feeling well, supported by their volunteer medics, and motivated by their hope for change. 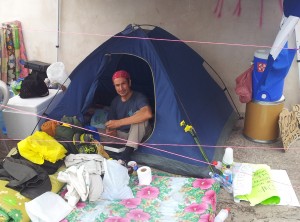 I returned to Tegucigalpa with COPINH who had come to reignite their support, but we arrived at an important time as the last 24 hours have seen important changes. The Indignados’ key demand is for an independent International Commission against Impunity in Honduras (“CICIH” in it’s Spanish initials), based on the UN-backed process currently underway in Guatemala. President Orlando has refused to initiate such a process – he is deeply implicated in the corruption and the Indignados are determined that he resign and be investigated. But yesterday, a UN fact finding team arrived in the country, invited by Orlando, to investigate how the UN might help resolve the crisis. This development shows the impact that the burgeoning movement has had.

But there remains a great deal of doubt as to what the UN can achieve, and there is already doubt among the Indignados that I talked to. For the last 2 weeks Juan Orlando has been pushing for his own form of Corruption Commission, the confusingly similarly “SIHCIC”, or “Integral Honduran System to Combat Impunity and Corruption”. The Indignados consider this proposal a hollow smoke screen to get Orlando out of trouble. At its heart the SIHCIC process would be integrated within the existing institutions and courts in Honduras. The Indignados movement has higlighted how the country’s corruption has spread perniciously throughout the structure of these institutions. As such, they demand an independent, international mechanism to hold these systems to account from outside – which only the CICIH would provide.

Orlando’s “integrated system” has already started to roll into action. The government has been carrying out a “dialogue” of what it says are open and inclusive talks with civil society groups, to voice their concerns. The Indignados say the talks are being directed to the same corrupt groups that need to be purged, and are in fact simply a monologue – the perpetrators of the corruption reflecting their lies back to themselves. What the Indignados fear is that the UN group, invited by the government, will simply be shown this same monologue smoke screen, its experience managed by Juan Orlando. 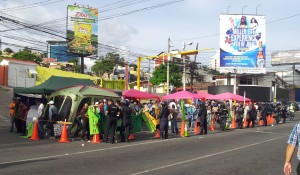 After the police action today, the hunger strike camp is condensed to the side of the road with a police line right next to it

At the site of the hunger strike this morning, they told me that they’ve not been invited to Orlando’s “dialogue”, and nor have they received any invite to talk to the UN delegation. Just before I arrived, the strike site suffered the worst intrusion by the police since it was first started when the police blocked half of the strikers behind a road block. At about 5 am this morning, the police dismantled their own road block, pulling down several of the tents that were attached to them as they went. The strikers told me that the action was an attempt to displace them, in their weakened state. They believe that with the UN mission here, Juan Orlando wants to hide the resistance to his SIHCIC. Thankfully, a bus load of COPINH members arrived just in time to support the strikers and prevent this from happening, but the calm of the hunger strike’s camp has been broken today, and the police line is now right on top of the camp.

The Indignados movement encapsulates people from all sectors of Honduran society, and all political persuasions. The corruption that has robbed millions from the country’s public services has affected everyone, and as such the movement encompasses many points of view. The organisers of the protest are keen to point out that they cannot act as figureheads for this diverse movement. However, several of them were invited this morning to talk to the UN delegation, and I talked to them after their meeting. Indignado Gabriela Blen told me that they were there mainly to voice the broad concerns of the movement – especially that the UN group would only see a filtered version of Honduras’ reality, and fall for the president’s hollow SIHCIC mechanism. She offered hopeful news that the UN group seems determined to get as broad a range of opinions as they could. Although there is little news of who the group are going to see, Blen reported that today the delegation also met with key opposition party leaders. This including the newly formed Anti-Corruption Party, and Mel Zelaya who was ousted in the 2009 military coup that brought the National Party to power. 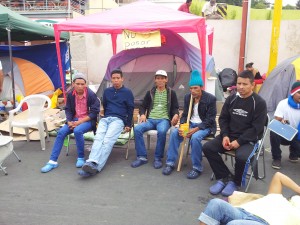 Tonight I am sleeping at the hunger strike camp, and the atmosphere is a mixture of uncertainty and hope, nervousness and defiance. The hunger strikers have shown that their camp intends to last. Indeed as some have left the strike for health reasons, more have appeared, including 7 Tolupan indigenous people who told me that in their economic marginalisation they are well used to long periods of near starvation. The UN mission shows that the protests are at least bothering Juan Orlando, but what results it might have can only be guessed. Ultimately, the CICIH process as realised in Guatemala requires the sovereign government to invite it in, and Juan Orlando’s actions so far have shown he’s determined to ignore it in favour of his shadow SIHCIC. Blen told me that the indignados organisers were up late last night poring through Guatamalan records trying to find loopholes to allow a CICIH to be instigated despite Orlando’s refusal.

Meanwhile, the hunger strikers hope they can hold their space long enough to keep the pressure on Juan Orlando. Even if a CICIH is put in place, the Guatemalan process has lasted years and Honduras’ people are suffering right now. Ultimately, as I reported in my previous article, the influence of the US and European powers in Honduran politics cannot be under-estimated. Guatemala’s commission was supported by the United States as they lost faith in the government there. Honduras’ corruption is deeply entwined in its trade and economic relationships with the global North’s powers. Its politicians and businesses benefit from the weak state to arrange trade deals that put money in their pockets and suck resources out of the country. Honduras’ people’s fight has an important front within our own countries, and they need our support to provide international pressure to break Juan Orlando’s current hold on the Honduran state. With all these uncertainties, it only remains to be seen how things will unfold in Honduras.

Please visit our action page for quick ways to support Honduras’ people in this movement – the country’s best opportunity for real change since their 2009 military coup. Sign our petition to the UK government, or use our links to email your representatives in Canada or the US.

More News on the Honduras Indignados