I’ve now completed the first major stage of my travelling, and reached my friends in Cairo, where I am going to stay for 2 weeks. After using a bus to get to Istanbul, I was then able to hitch-hike and couch surf all the way to Iskenderun in the South of Turkey, to catch a ferry to Egypt and complete the journey. The trip through Turkey has definitely been the most fun and interesting part so far, and the best place to get the most out of hitch-hiking.

Istanbul was always one of the places I was most looking forward to seeing on my trip to Egypt, it’s a place I’ve always wanted to go and I was really excited about arriving there. But a week and a half ago when I was considering the next stages of my journey I was getting increasingly apprehensive about what I had taken on in hitch-hiking all this distance. With the anxiety of waiting hours for lifts in the occasional bad spot, the increasingly exotic and unfamiliar culture and the rising heat, I was thinking about settling for buses through Turkey.

At sunset, the Istanbul skyline silhouettes the minarets of its many mosques

However, a few things came together to put the wind back in my sails as far as hitch-hiking goes. First was just taking a break – getting a bus into Istanbul overnight on the 19th September, and then spending an extra 2 nights there to recharge – hitch-hiking 5 days straight is a bit tiring! With a bit of time to consider things clearly, I was able to see that actually things were going very well into Sofia. With the last hitch-hiking lift taking me straight across Serbia and Bulgaria in one I was actually only one day behind schedule, and I still had the words of Erna (another driver) from Zagreb ringing in my ears – “Don’t give up!”. But the most important thing was just being in Istanbul and Turkey.

As a city and a tourist experience Istanbul does not disappoint. First of all, everything is scaled up in Istanbul – it is a huge city – already much larger than London – and one of the fastest expanding cities in the world. This was apparent as soon as I arrived, from the spiralling motorways to the cavernous multi-layered architecture of the main bus station. Istanbul spans 2 continents and is one of the main gateways between Europe and Asia, and the energy this gives the city is palpable.

But of course Istanbul has much more to offer than civil engineering. It is also a city absolutely bejewelled with mosques – particularly engaging for the European visitor. Turkish mosques rise above their surrounding buildings with their imposing central domes and 2 to 4 minarets – and these points and curves are written across Istanbul’s skyline like a signature. With the beauty of this Islamic architecture up-close, the massive Bosphorus river cutting the city in half, and the lit up Bosphorus Bridge spanning it, Istanbul really is a beautiful city. 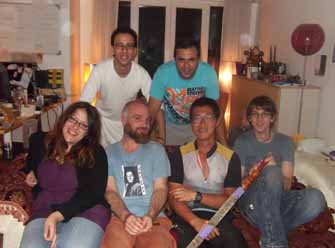 The group at Yigit’s house

I spent my time in Istanbul with another Couch Surfing host, Yigit. His flat was a bit different to the others I had stayed in so far – for the last 2 months he had been filling it with about as many couch surfers as he can, so it had the feel of an international hostel. While I was there there was also a Bulgarian couple, a Korean guy (100 days into a mammoth cycle journey from London to India! Amazing!), and a Moroccan – Soufiane – who was kind enough to show us all around the sites as he’d been there a week. Although a little intense, it was an interesting new experience to be thrown into Istanbul with all these people, and great to instantly have a tour group for the days I was there.

The host himself, Yigit, is an engineering consultant, specialising in environmental civil planning solutions – sustainable building, recycling and energy. This is something evidently needed for the breakneck expansion of Turkey both in Istanbul and beyond. As he told me, the country’s economy was liberalised and opened increasingly to European and US interests 10 years ago, with a change of government. Istanbul, as the old imperial centre and gateway to Europe, demonstrates the impact of this most clearly.

Yigit lives in a relatively new, gated apartment block surrounded by enormous construction sites for super-modern luxurious apartments. However, the area, Umraniye, has long been a working-class area, with a population significantly made up of migrant groups, including many Roma and Kurdish people, who under the previous government were tolerated building their own, informal (and illegal) ‘gecekondu’ housing. 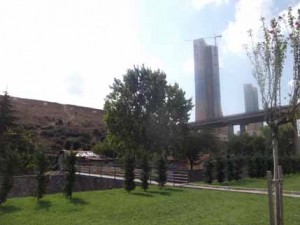 Now, the land this housing on has become prime real estate, and its value gone through the roof. Yigit was lucky to buy his apartment during the worst of the economic crisis but it’s value has more than tripled over the last 3 years, such that even as a consultant he could now no longer afford it. The area now shows the clear juxtaposition of slum-like gecekondu housing nestling between towering, glistening blocks, and the worrying question of where the informal occupants go when their land is acquired for development.

Yigit told me that the government has been offering the residents new apartments elsewhere to relocate to, but that many do not want to or feel comfortable leaving the relative freedom of their current, open houses. Ultimately however, the residents are not given the choice, unless they can argue for legal entitlement to their land, which is rarely possible. In some cases, the relocated families are obliged to pay the increased cost of the new property they enter as a long term loan. As marginalised groups trying to make a living in the urban sprawl of Istanbul however, these costs are frequently beyond them to pay back. The stigmatisation of Kurds for example, as an ethnic group responsible for anti-Turkish terrorism, was something that was apparent almost every time the issue came up talking to people in Turkey. Those Kurds that flee the violence in the South East of the country to Istanbul, with little money or education, have few opportunities to be integrated into the society or economy there.* 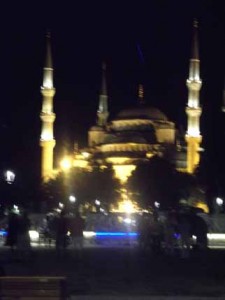 The Blue Mosque, one of the largest in Istanbul

It was extremely interesting talking to Yigit about these issues, and sharing some touristy experiences with the other couch surfers in his apartment. It was also extremely refreshing in Istanbul to get a first taste of the Turkish people’s good humour and friendliness. From the first bus driver who ran off his bus to get change for me after I arrived in the city, to people’s patience managing language barriers and beyond, there is something easy about the way that Turkish people welcome and talk to strangers.

And with this in mind, on Saturday the 22nd I started off again hitch-hiking, further into Turkey. From then on I really saw how enjoyable hitch-hiking can be, if you and the people giving you lifts are relaxed and friendly about it, and the next 5 days through Turkey were awesome overland travel experiences.

But it turned out I had more than I expected to say about Istanbul, so I’ll describe the rest of this journey in a few days, in part 2!

*References relating to the issue of gecekondu housing and Istanbul’s expansion: